Mosaics installed at the Cathedral

Awe-inspiring mosaics have been installed in the Circle under the Dome and in the Pendentives that connect the Dome to its four supporting pillars, in the Cathedral of the Transfiguration.

Toronto-based artist Roumen Kirinkov, working with the Slovak Greek Catholic Church Foundation, created the drawings, which were rendered into mosaics and installed in the Cathedral by Travisanutto Mosaics of northern Italy.

The elegance of the mosaics' design, their innovative content and the mastery of their artisanship make them unique.

The mosaics were created by a Travisanutto team of four artisans, who are among only a half-dozen people in the world qualified to produce flawless mosaic renderings on a curved surface. Two members of the team came to Canada for six weeks to undertake the painstaking task of installing more than 1.4 million Venetian Smalti glass stones, known as tesserae, on the 1,000-square-foot surface of the Circle under the Dome and the Pendentives.

The mosaics in the Circle under the Dome go beyond the traditional depiction of the thirteen Apostles, by adding, St. Mary Magdalene; a French saint, St. Madeline Sophie-Barat, founder of Les Réligieuses du Sacré-Cœur; and two Canadian saints, St. Kateri Tekakwitha and St. Brother Andrré of Montreal.

The mosaics in the Pendentives, which would traditionally contain the biblical manifestations of the four Evangelists, which would have been portrayed by a lioness, an eagle, an ox and a winged male figure, have been revised to include Canadian content.

The lioness has been replaced by a wolverine. The eagle was changed into a peregrine falcon, which is a species that nests in Queen's Park and other buildings in the city.

The ox is depicted by a dairy cow, to recognize Canadian dairy farmers, especially Romandale Farms and its founder, Stephen B. Roman, Canada's foremost breeder and exhibitor of Holstein cattle and the guiding light behind the design and construction of the Cathedral.

Installation of Circle and Pendentives Mosaics 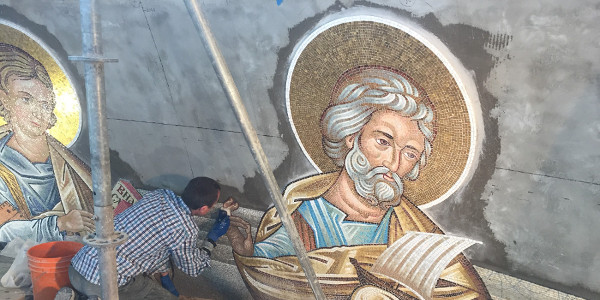 Mosaics depicting the thirteen Apostles, a French saint, and two Canadian saints are taking shape in the Circle under the Dome of the magnificent Cathedral of the Transfiguration. Preparation for the installation of the Pendentive mosaics is also underway.

The mosaics in the Pendentives, which would traditionally contain biblical manifestations of the four Evangelists, portrayed by a lioness, an eagle, an ox and an angel, have been revised to include Canadian content.

For an example, instead of an eagle, a bird that is not indigenous to Canada, one of the Pendentive mosaics depicts a peregrine falcon, a species that flourishes in Ontario, with at least one pair having nested at Queen's Park.

When the installation is completed in late spring, the extensive scaffolding beneath the Dome will be removed and an application for public occupancy will then be filed with the City of Markham.

The Cathedral will then be able to permanently open its doors to Catholic congregations wishing to worship there. It will also be able to host concerts and other public events.

A temporary occupancy permit has allowed the congregation of Jesus the King Greek Melkite Catholic Church to celebrate Sunday Mass since last November.